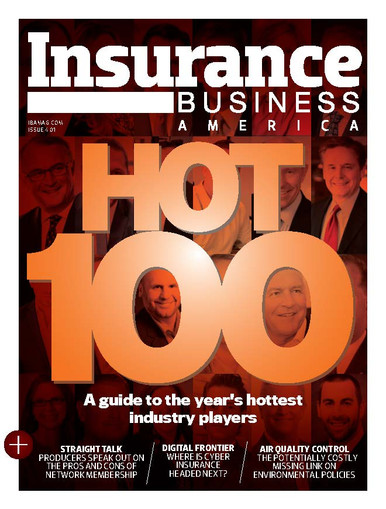 From CEOs and presidents of major insurers, to regulators and local heroes, 2015 was a hot year
for the insurance industry. In this issue, Insurance Business America highlights 100 of the
biggest names in insurance. These are 100 of the industry’s biggest power players who deserve
recognition – whether it’s for 12 months worth of achievements or one gutsy move that shook up
the insurance world in 2015.

The great cyber imbalance
While more companies than ever carry cyber insurance, take-up rates vary widely among industries
and limits are still insufficient.

Diversity is key to long-term success
It’s not only important to diversify your business, but also to hire a wide range of employees,
writes Eddie Besaw.

The ace of Allianz
Arthur E. Moossman, president and CEO of Allianz Global Corporate and Specialty in North
America, shares his team successes in and out of insurance.

Producers on networks
IBA asked thousands of producers why they have or haven’t chosen to join a network or alliance.
We reveal what they had to say about the pros and cons of membership.

Expanding the ACA
The Affordable Care Act continues to be debated, and now some wonder whether it should be
extended to undocumented workers. Three insurance professionals have their say.

The Internet of Things
Internet-connected devices – from thermostats to nuclear reactors – are presenting the next big
risk in cyber insurance.