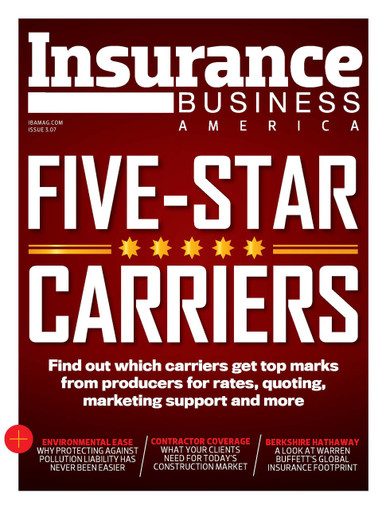 COVER: Five-Star Carriers
Last month, insurance producers revealed their priorities in selecting carrier partners. Now, industry-wide survey results indicate which carriers are making the grade in everything from competitive rates to technological capabilities. In revealing the leading carriers for each of 10 categories, IBA hopes to improve the increasingly important relationship between producers and carriers, and open up a two-way dialogue for a constructive conversation about the future of the insurance business.

Driving the future of auto insurance
Driverless cars will complicate liability and disrupt traditional sales of personal and commercial auto insurance. Industry, experts, however, still see a role for producers – perhaps an even greater one.

Should irrelevant rating factors be removed?
Three prominent industry figures speak out on the prevalence of non-driving related factors in insurer calculations to determine rates. It’s a popular practice, but is it justified?

Expanding Horizons
Peter Eastwood, global president and CEO of Berkshire Hathaway Specialty Insurance, discusses the insurance giant’s progress to date on what he describes as a decades-long journey.

Going Mainstream
No longer a specialty coverage, environmental insurance is becoming ever more necessary to cover exclusions in general liability policies – and it’s likely cheaper than your clients think.

Coverage from the Ground Up
As the US economy recovers and new threats emerge, the landscape of contractors insurance is changing.